Thanks for printing!  Don't forget to come back to The Home Fix-It Page by Dave Baker for fresh articles! 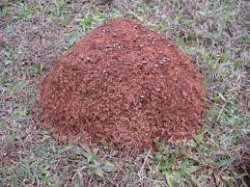 - 'Tis the season for fire ants. Looking for relief? Here are 5 home remedies to kill those nasty boogers.

- Sprinkle grits around the mound. Readers say: The ants will eat them, the grit will expand, and the ant will die.

Chance this works: 1 in a very big number. Why: Like you, an ant won't eat food that is bigger or the same size as it is in one meal.

- Scoop into a fire ant mound and place that on another fire ant mound. Readers say: The fire ants will wage war on each other and exterminate themselves.

Chance this works: 0 in 10. Why: If you were to scoop one ant mound to another nearby ant mound the likelihood that it is the same colony is huge. Therefore you would be scooping ants from the same colony. No war waged. No self-extermination.

- Pour hot water on mound. Readers say: This either drowns or scalds them, but either one is good by them.

Chance this works: 100% to kill ants. 0% to kill colony. Why: Scalding water will kill a lot of small little insects, but the colony is too large. You might get rid of the mound, but it would likely re-appear somewhere else.

- Pour gasoline on the mound. Readers say: This makes more sense than hot water, especially if you ignite it after you pour. <Warning, duh, this is not too safe, not to mention bad for your yard.>

Chance this works: 1 in 10. Why: Again, you will do a good job of killing any insect the gas comes in contact with, along with the grass and plants around where the gas was applied. You might even get rid of the mound, but again, it will likely appear somewhere else. Plus it's bad for the environment. Plus the desire to ignite will great.

Chance this works: Slim. Why: Although this is the best of the bunch, it won't kill the colony. However it will put the surviving ants (roughly 2,700,000,000 of them) in attack mode. Seriously. To an ant's thinking, something is attacking their colony and their queen. If you mow one, it would be best to stay away for a while.

You would be shocked to know how many fire ants are residing under your yard right this very second. Same thing with termites. Queen removal is the only way to be rid of the colony, and it's possible that a colony has more than one queen.

It's best to sprinkle poison around the mounds and be patient. I know that is tough, but that is your best plan of attack.

How are your gutters?

Q - 4 years ago I had the best gutter covers installed on my gutters to keep the gunk out. Now my gutters are over-flowing. Do I need new gutters? Mary Ellen - Decatur A - I can't speak to whether you do or don't need new gutters without first seeing your current gutters, but I can tell you this: Gutters, even those with...

If I had to guess what is wrong with your house...

Have a Question? Ask Dave

Contact Dave with questions or to discuss your next project. If you are a company and would like to advertise on this site, please visit Advertise with Us.